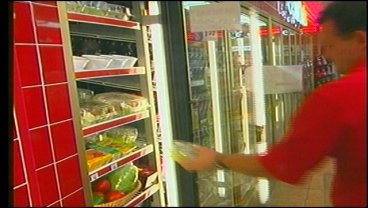 HOWE, TX--- Voters approved a new ordiance allowing the sale of alcohol and beer within the city limits. Michelle Gillespie reports that a city ordinance that's been in place for years could threaten which of those businesses are allowed to cash in.

The ordinance restricts the sale of alcohol by establishments within 300 feet of a school or a church could pose a threat to their business.

Chef Robert Morf doesn't consider himself a drinker but he's excited about the new liquor law and what it could mean for his business.

"A lot of my food is of the caliber that begs for a glass of wine," says restaurant owner and chef of Wyoming's, Robert Morf.

So, first thing this morning, Chef Morf was among the first in line to apply for his liquor license. But that's when he found out his neighbor to the south could keep him high and dry.

"Wyoming's may have an issue--the Baptist church is right behind it," says Howe Mayor Jeff Stanley.

"The walking distance from door to door from the church to here is over 300 feet," says Chef Morf.

And "Wyoming's" restaurant  might not be the only one in that situation. Just down the street, the big Exxon right off of Highway 75, might be in the same boat.

"The Quick Check has "School Zone" which is a daycare center fairly close by so we'll have to do some measuring on those," says Mayor Stanley.

But Exxon Quick Stop Manager JoAnn Coats says they can't afford to have other convenience stores in the area selling beer and liquor, while they're not.

"People come off the highway every day and say: 'Where's the beer?' and there's no beer," says Coats.

The manager at the Exxon Quick Stop said two beer distributors already came into town to try to solicit business and the city says they'll work with the businesses to make sure no one is left out.