The Early 1900s, When the Battle of the Ax Began - KTEN.com - Texoma news, weather and sports

The Early 1900s, When the Battle of the Ax Began 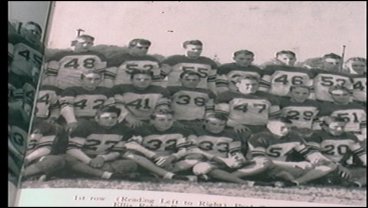 GRAYSON COUNTY, TX -- For Sherman and Denison residents, the "Battle of the Ax" is more than just a football game, it's history in the making. After all, it is the oldest high school football rivalry in Texas that is still played today. Since it is so historic, we sent Deeda Payton to dig up what life was like back in early 1900s when the very first game was played.

Theodore Roosevelt was president at the turn of the 20th century. In 1906, the first year the school's recognized the famous football game, Roosevelt became the first American to win the Nobel Peace Prize.

The early 1900s was a very active time for Sherman and Denison, as Marcia Rolbiecki of the Red River Historical Museum says, our area has always been very cultural, especially back then. And, the "Battle of the Ax" wasn't the only show in town. "People dressed up, they made their own entertainment, they went out to concerts, went to the Municipal Pool, lovely things they did."

In 1905, the first movie theater opened in Sherman, and President Teddy Roosevelt visited Sherman on his campaign for a second term. "He spoke at the courthouse not our current courthouse, it burned in 1930."

That same year, Denison celebrated the arrival of the steamboat, the Annie P., an event that rekindled dreams that Denison would become an inland port.

And, everything was much less expensive. "I think soda was probably a penny, literally. I think you could buy a car in the early 1900s when they first started making automobiles for 50-dollars, very, very cheap. But, it's all relative because people's wages weren't what they are today either."

Things we now take for granted were luxuries. Pavement, for example, was first laid in Sherman in 1905 and it wasn't everywhere. And, air conditioning was non-existent. "They fainted a lot."

But, they did know how to play football. And, 1906 was the first year both Sherman and Denison schools recognized they played each other in a game that later became known as the "Battle of the Ax."

Another interesting fact is that in 1905, President Roosevelt threatened to ban football following a series of player deaths from injuries suffered during games. One rule change introduced in 1906 devised to reduce injury was the introduction of the legal forward pass.