Jackets Line Up for Ax Tickets 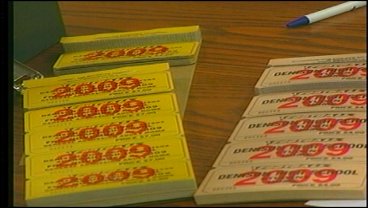 The Big Battle of the Ax game, between Sherman and Denison, is just 5 days away and the game is so big this year Jacket's fans slept in their cars to get tickets.

It's a game that always draws a crowd, filling the stands and the parking lots every year.  Two rivals, the Sherman Bear Cats and the Denison Yellow Jackets, battling for the big win.  The game, so important fans lined up for hours in hopes to score a ticket to Friday night's game.

No matter how old or young, a jackets fan, they have one common goal, team support.

This morning at Denison High School, it was first come first serve for ticket sales.  When fans arrived, they received a numbered ticket to keep order in a line that formed outside as early at 5 a.m.  But not everyone standing outside received a ticket, Denison school officials say tickets run out every year.  But fans say even if they don't get a ticket this year, they will be in the parking lot cheering on their team.

A number will be available at the gate for both home and visiting fans, but that will depend on the number of student tickets sold.