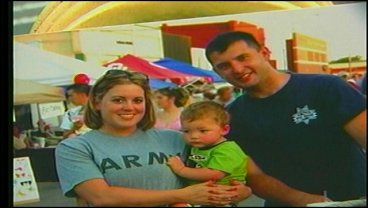 We told you two weeks ago, the local community came together to raise money for the officer and his family.

It's been more than month since Officer Blackshear has seen his two year-old son Aidan.

"It was wonderful--he came running out screaming my name and he told me to watch out for the mud. He told me good job when I got up and I didn't even know he was talking that much. It was really nice," says Blackshear.

Because of flu concerns, young Aidan was not allowed to visit his dad in the hospital.
Blackshear says although he missed his little boy, he was overwhelmed by the support he received from the community. He saw so many friends, family and fellow officers visit him that he didn't feel like he was too far from home.

"It wasn't really any different than a change in the setting because so many people come down and see me. Every day I would see somebody," says Blackshear.

And now that he's back in Durant, he's feeling stronger and more energetic every day.

"Every day there's new movement, new muscles are waking up. Things are getting back to normal," says Blackshear.

Blackshear has gone through several surgeries the past month on his ear, arm and leg and he says his doctors didn't set a date as to when he'd be fully recovered because they knew he'd try to beat it.

"I think I'm healing faster at home than I was at the hospital," says Blackshear.

Blackshear hopes to be working part-time at the police department in the coming weeks but for now, he has a few other things on his mind.

"When I woke up in the hospital I found out we were going to have two more children...twins!" laughs Blackshear.

As for his recovery, Blackshear still has to check in with his doctors in the coming weeks as well as begin his physical therapy.