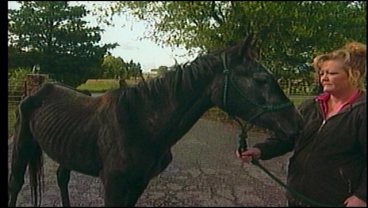 UPDATE: GRAYSON CO., TX -- An update now to a case concerning starving horses in Grayson County. We checked with investigators on Tuesday. They say they're still looking into the case, but all of the horses have been removed and are now being cared for in other locations. You'll remember this story from last week which occured South of Denison.

We inadvertantly showed a house which could have been construed as being involved in the story. We want to clarify that house in the background was not part of this story.

More than a dozen starving horses were found in Grayson County.  Now the possibility exists of criminal charges.  As Chris Severy reports the horses were rescued from the "Lucky G" Ranch just south of Denison.

The Grayson County Sheriff's Office is investigating the owners of that ranch.  However, investigators say it's still too early to talk about possible charges.  A local vet with two decades of experience treating horses says she treated these same horses just a year ago.  Dr. Katie Hayes says, "The horses were thin then.  This has continued to the point where these horses are emaciated and one has died and we will just not tolerate it anymore."