It's Fall Ya'll at Baker's Acres 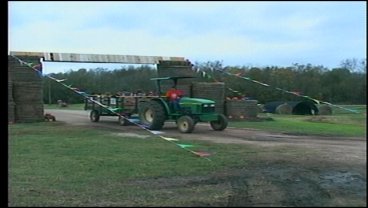 It's fall ya'll at Baker's Acres in Tishomingo. "Happy Halloween!" Thousands of kids come from far and wide to play in the pumpkin patch, roll around in the corn, and slide down the hay. "Because it's so much fun to go down the slide."

But, that's not all, there are acres of activities at Baker's and everyone's got a favorite! "It was riding the 4-wheeler down the dips an stuff that was pretty fun."

There are duck races. "I was going crazy hitting it down and I won."

Even bunnies. You may be asking what a bunny has to do with Halloween, but at Baker's anything goes and the kids can't get enough. "They like the animals, they do, and some have never seen these animals before. We've got an Obama lama."

Roger Baker, the owner and creator, says he saw a need for a pumpkin pallooza and found just the right group to try it out before opening day. "I've got 8 grandchildren and we did the proofing with them. They really enjoyed it."