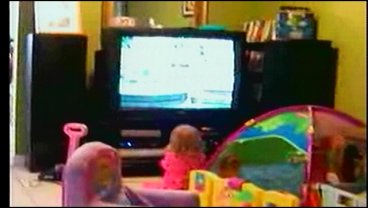 DENISON, TX -- Television takes over, Nielsen says Americans are watching more television on more kinds of screens than ever before. And, TV viewing by children is breaking records. Deeda Payton reports on just how much TV we are taking in.

Local students from Tushka say they don't have time to watch too much TV, but new statistics out tell a different story.

For many, television is entertainment, a digital companion or maybe just background noise. Whatever your reasons for watching, a new Nielsen study shows the average American television viewer is watching more than 151 hours of TV per month, which is an all-time high.

And, the study shows children are spending hours in front of the tube too. "Mostly before I go to sleep probably three to four." "I watch two to three hours a night."

Some Tushka teenagers took a tour of our KTEN studio and shared some of their favorite shows to watch. "Probably MTV Made or the Food Network or something crazy." "I just watch whatever is DVR'd."

And, digital video recorders are also aiding the amount of television two to five-year-olds are watching which Nielsen reports is about 32 hours a week. "I would think that as children are younger it is more important for them to get socialization and personal interaction because that is when most of their development is occurring."

Doctor Paulette Pitt is a local child psychologist who says there are both pros and cons to children watching TV, and like anything else TV should be enjoyed in moderation. "The skills that they are missing out on in the hours they are spending doing those activities can't be replaced.

While Nielsen reports that Americans are watching five hours of TV a day, Nielsen has no means of determining if they are actually watching or just have them on in the background.