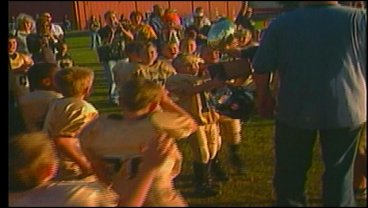 You may be used to the Super Bowl taking place in the Winter, but Texoma has one in October involving a pair of youth teams.

The Red River Youth Football Super Bowl took place Saturday afternoon in Blue Ridge, Texas. It was a battle of the Tigers. The Blue Ridge Tigers faced the Whitewright Tigers.

"We watched these boys from the first practice when a lot of them didn't have a clue what they were doing," says Debbie Brown, a fan. "And, now look at them. They're at the Super Bowl."

Like every Super Bowl, the game featured its fair share of drama. Blue Ridge scored in the final minute of the game to send it into overtime.

In the extra period, Whitewright scored on its possession and then stopped Blue Ridge on a fourth down to seal the victory. Whitewright won 20-14.

"That was the toughest game we played all season," says Whitewright Coach Alvin Pitt. "So, I am proud of them. They came through when they got punched in the mouth, and they finished it."

The Whitewright Tigers not only won the Super Bowl, but went undefeated the entire season.