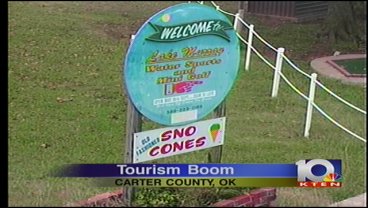 CARTER COUNTY, TX -- Tourism in Oklahoma has reached generated revenue of 6.1 billion dollars throughout the state.

Carter co. ranks seventh in the entire state for local tourism boost to the economy.

The economic development center says local attractions such as Lake Murray State Park and the historic downtown area bring visitor's in from other area, which in turn generates local revenue.

"Because tourists are bringing all their money into the community, and so when we attract tourists we put an emphasis on being a good tourist destination," Vice President of the Ardmore Development Authority, Mita Bates said.

The Ardmore Chamber of Commerce has also reached out with social networking tools such as Facebook, Twitter, and You Tube to generate more visitors to the area.

Meanwhile, business manager at the Lake Murray Lodge, Lewis Logan says their rooms are booked full on weekends during the busy season.

"We're booked every weekend from about spring break in March through the month of November," Logan said.

And he says the weekdays often attract business professionals, which according to the Chamber of Commerce is another way to continue generating revenue into the area.

"State numbers say that an average overnight guest will spend about $235 in our community," Bates said.