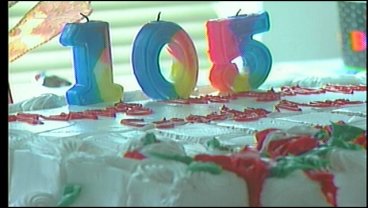 The oldest living person in the world today is a 114-year old from Japan. But, right in here in texoma, we have someone who may be trailing right behind him. At 105, she's in good health and full of memories that have shaped the state of Oklahoma and the city of Antlers. KTEN's     Jhen Kordela has her story.

It's not every day someone turns 105 years old. Antlers resident Georgia May Self was born on October 21st, 1904. That's three years before Oklahoma became a state.

Self has seen her hometown of Antlers, Oklahoma grow through several decades.

But, it hasn't all been cake and punch.

April 12, 1945,  Self was 41 years old when the city was devastated by a powerful tornado that killed nearly 70 people.

"I was working at the courthouse then, and the tornado hit about 5 o'clock," says Self.

It's not the big events, though, that have most impacted her life. It's how she's handled them.

"Just be kind and work hard," says Self.

Her heritage has contributed to those beliefs.

"One of the oldest among our choctaw people," says Chaplain Bertram Bobb, of the Choctaw Nation. "She (Self) has a great testimony, and this is the way our choctaw community lived -- they were peace loving people."