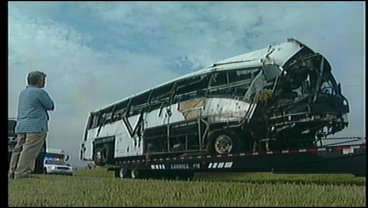 SHERMAN, TX - The investigation into last year's deadly bus crash in Sherman is coming to a close. Katy Blakey has more.

The National Transportation Safety Board announced Wednesday it will meet next week to discuss it's findings.

The crash site last August was overwhelming after 17 members of a Houston Vietnamese community were killed and dozens more injured when their bus veered of Highway 75 and toppled over. Federal investigators arrived shortly after the wreck to determine what happened.

Initial reports focused on a re-treaded tire officials believed deflated and then caused the accident. It's a key piece because federal regulations prohibit retreads from being used on the front of buses. But Sherman Police announced just a few months ago, that preliminary reports indicate the tire failed because of a puncture, and not necessarily because it was re-tread.

Next week's meeting is suppose to answer the question: What went wrong? The board is also expected to give safety recommendations to prevent an accident like this happening in the future.

The meeting is scheduled for next Tuesday.