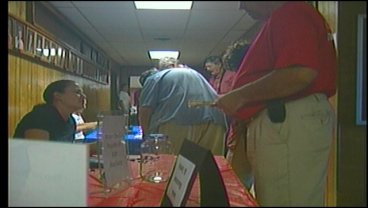 DURANT, OK --Durant residents show support for one of their own, a police officer who was seriously injured in the line of the duty last month. Tuesday night, they turned out for a big benefit dinner for the officer and his family. Deeda Payton has the story.

Hundreds showed up at the Bryan County Community Building, not for the spaghetti, but to show their support for a man who put his life on the line everyday, and who, last month, was injured during a police chase. "What I've been through? Well it was just horrific, the whole accident, everything, but he's doing much better now." Justin Blackshear is still in the hospital nursing his wounds.  His mother, Kelly, says he has undergone between six and seven surgeries and is preparing for yet another operation on Thursday. "He's doing well. We were hoping to do a skin graph yesterday, but he still had just a little bit of the area there that's not quite healed good enough."

The family says it is times like these that they count their blessings. "Tons of support, it's amazing, we've been amazed. I guess you don't ever realize it till something like this happens."

Fellow officers and organizers of the benefit dinner and silent auction say not a day goes by that they don't get asked about Justin. "I don't think he quite realizes what's going on here. The phone calls that we receive daily wanting to know about him and his family, the police officers themselves, what can we do to help."

It seems everyone is stepping up to help. "Tonight's turnout as you can see is packed and my cooks tell me that I'm probably going to get more food and we were preparing for 1000 people so it's just amazing, the support from the community and surrounding communities has just been overwhelming." Lt. Carrie Wyrick of the Durant Police Department says "I've had several people lay down 100 dollar bills for two to three tickets."

Organizers say they have more than tripled their expectations, but want to keep the amount of money they raised a surprise for the family.

While in the hospital, Justin, who is already a father of one, learned his wife is expecting twins. Good news in tough times that means he may be spending more time in the hospital in the future with his wife.