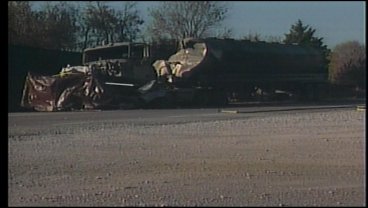 MARSHALL CO., OK - A fatal accident shut down Highway 377, north of Madill, for over five hours.

OHP Troopers described the scene as horrific after a semi-truck and a car collided head-on Monday afternoon. The car was unrecognizable, crushed under the cab of the semi. The impact caused flames to burst from the wreckage, spreading to the surrounding brush.

The driver of the car was 69-year-old Carol Wheeler-Linston from Denton, TX. She was pronounced dead at the scene. Troopers are not sure why she was in the path of the on-coming truck.

"She overcorrected into the path of the southbound semi," said Trooper Steve Nabors. "There really wasn't anything he could do to avoid the collision. We'll never know what may have been distracting her."

The driver of the semi walked away from the crash unharmed, and authorities do not expect he will face any charges. The accident shut down the road for more than five hours.