Pottsboro Coach Turns Himself In To Authorities - KTEN.com - Texoma news, weather and sports

Pottsboro Coach Turns Himself In To Authorities 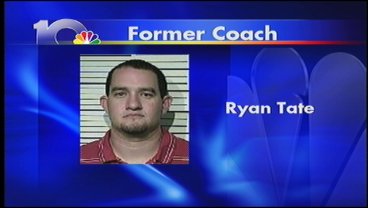 POTTSBORO, TX---Yesterday, authorities issued an arrest warrant for a former Pottsboro teacher and coach after he was accused of sexual misconduct with one of his students. Michelle Gillespie reports that this afternoon a little before 2 p.m., Ryan Tate turned himself into the Grayson County Sheriff's Office. He was booked in, completed the necessary paperwork and procedure, posted a $10,000 bond and left nearly 45 minutes later. His attorney Bob Slagle says it was a very civil matter.

Of course, Ryan Tate no longer works for the Pottsboro school district after he resigned from his post last week after allegations surfaced that he had sexual contact of some kind with a Pottsboro student.

Until a court date is scheduled, Ryan Tate is a free man on bond.