A Sherman family works to get their life back together after house fire - KTEN.com - Texoma news, weather and sports 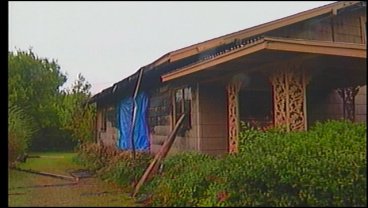 SHERMAN, TX -- A house fire on Saturday night in Sherman left a family without a home.

Korinia Kennedy said her and family went out on Saturday night to get a movie and before they came back, she got a call from police saying their house was fire.

"We turned the corner and we saw our home - it's gone," Kennedy said.

She says the hardest part is the uncertainty for her family.

"We're hoping to just be able to get by day to day and we don't what we're do for the next couple of weeks or so until then," Kennedy said.

And for her kids, she says it's been even more difficult. "The kids clothes, the beds they have no toys," Kennedy continues, "I think that's been the hardest thing for the children - what do they play with?"

In the meantime, the American Red Cross in Sherman helped to get them shelter and clothes for the time being.

"We worked to get them a hotel that night and the kids some clothes cause they went to school today," said Sharon Watson of the American Red Cross in Sherman.

The Kennedy's say they are very thankful for help they've received, but mostly the warm hugs and smiling faces have kept them going in this time of uncertainty.

"Because without a friendly smile or a hug you wouldn't believe how far that really goes for someone who has just lost everything," said Kennedy.

The American Red Cross in Sherman is accepting cash donations to help the family. They're also setting up a drive with Toys for Tots to help the kids get a few toys for Christmas.