Fire Breaks Out In Whitesboro 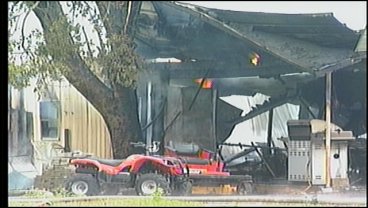 The fire reportedly started at an auto shop and office and quickly spread to a house next door.

It was a smokey scene out of Whitesboro when crews arrived just before 2:30 off of East Main at 377. A shop and office were fully involved, and a home was on fire.

According to the Whitesboro fire department, the home was occupied when it caught  fire. But, the owner did manage to make it out ok. Neighbors out there were shocked at the scene.

The auto shop was destroyed along with several vehicles inside.

A power line went down on the side of the building. The department had to call out an electric crew to take care of the live line, so officials could tend to that area.

Luckily, no one was injured. The cause is under investigation.