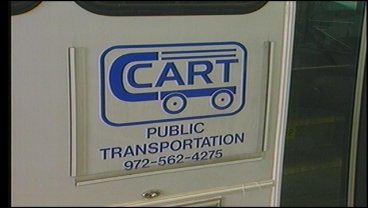 Thursday, they accepted a $1 million donation from TX Dot in the form of nine more buses.

Blake Utter Ford agreed to service the buses and get them into tip-top shape and TAPS employees say they hope to have the buses on the road and making the rounds by early next week.

Underwood says they're a huge help for his recent expansion efforts to try and grow and develop the public transportation system here in North Texas.

"They got together and knew we needed the vehicles and they knew we were expanding so rapidly and so quickly, there's such a demand in the Grayson County area for service so we went and got the vehicles and are putting them to good use," says Underwood.

A handful of TAPS employees took one van to drive down to Collin County to pick up their new buses.

They say they're excited to get the new vehicles to accomodate a 35 percent increase in ridership that they say they've seen just in the month of September.

TAPS has hired more than 30 employees in the month of September but Underwood says they're still hiring and interviewing every day.