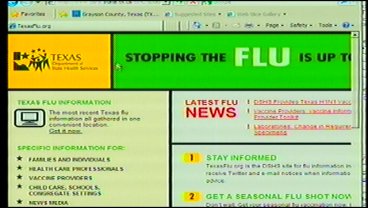 Grayson County, TX -- While H1N1 vaccines are being distributed in our local counties in Oklahoma, they have not yet arrived in our local Texas counties. Deeda Payton reports.

All the first shipments of H1N1 vaccines across the country came in the form of flu mists which are most effective in children and can only be given to those ages 2 to 49. So, health experts are recommending that children be the first to get vaccinated. And, since Grayson County doesn't have a large pediatric population, they have yet to receive their first doses.

Health experts in Grayson County say when they pre-registered for the H1N1 vaccines on www.texasflu.org they were asked to list the number of people they would be vaccinating and their age groups. Since Grayson County did not list a high number of children, they were told their shipments would take longer to come in because the state of Texas is focusing on vaccinating the children.

Children are one of the five priority groups that include healthcare workers, pregnant woman, and daycare workers.

Donna Glenn of the Texoma Medical Center explained on our Midday show yesterday that individual communties will decide which of their priority groups to vaccinate first when those doses do become available. "Even within Texas, communities are looking at their particular population. Maybe they don't even have a lot of pediatric people in their population so maybe they're going for the older kids, or maybe they are going for the healthcare workers, so it's ok to have some differences."