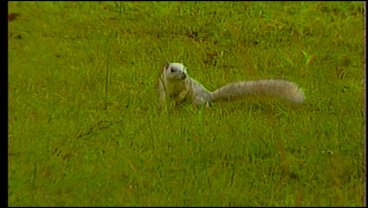 It's all white, furry and a treat for the Preston Peninsula community.

The white squirrel is roaming around Preston Peninsula, but it's not an albino. It's a rare breed for North America, and many of the residents are happy with their new friend.

"Oh, we think he's wonderful," says Kim Bailey, a local resident. "He's so much fun to watch.   We sit out on the deck in the back and he's out there and we've watched him for about a year now. It's just loads of fun."

According to the White Squirrel Institute, the coat color originated for protection.