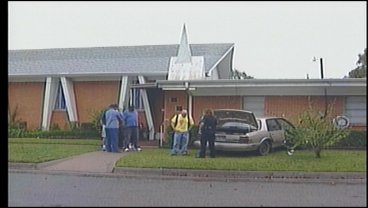 SHERMAN, TX -- Chalk it up to slick streets and inexperience. Two young men crashed their car into the side of a Sherman church Thursday morning.

The mother of the two young men in the wrecked car, say one of her sons was trying to teach his younger brother how to drive.

The wreck drew a crowd of concerned neighbors and church members at the Progressive Baptist Church off College Street. According to the mother of the victims, her 18-year-old son was behind the wheel and his older brother in the front seat.

We were told the youngest brother, the driver, was practicing by driving up and down Montgomery Street, when they made a u-turn, possibly making that turn too fast, losing control and hitting the church.

Both men were taken to Wilson N. Jones, but their mother tells us they were not hurt badly and were more scared than anything.

"It's real scary, really scary," said Mary Brown, the young men's mother. "You try not to cry, act tough for them, but it's really hard, real hard."

"It's a blessing nobody was hurt," said the Progressive Baptist Church Pastor Craig Davis.

Although the brothers suffered minor injuries, no one at the church was harmed.