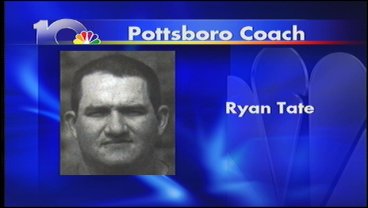 Pottsboro Police Chief Brett Auterburn says the investigation is on-going right now. After the Pottsboro School District contacted him around 10 o'clock Wednesday morning about accusations of sexual misconduct with a 17-year old high school softball player and her male coach.

The man at the center of the accusations is high school softball coach Ryan Tate. This is his second year as a softball coach at Pottsboro High School. He's also a teacher at the middle school. Before that, he coached at Sherman high for seven years.

I went to the Pottsboro Police Station twice today, but Police Chief Brett Auterburn did not wish to go on camera. He said he was meeting with lawyers from both parties involved and that the investigation is on-going. I also spoke with Tate's wife, Tracie, at their home in Sherman Wednesday night. She's been a coach for the past seven years over at Sherman High School.

Traci Tate says her husband called her at 1 a-m Wednesday morning to confess that he had an inappropriate relationship with a 17-year-old student and player on the team he coached right here at Pottsboro High School.