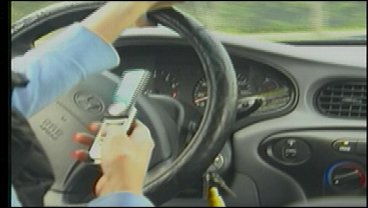 Distracted drivers are all over the roadway, from sipping sodas to reading to talking on cell phones, drivers are doing more than focusing on the roadways.

Taking your hands off the steering wheel slows your reaction time.  Drivers should be aware of all the cars around them, the cars in front, behind and off to the side.  If drivers are busy playing with the radio, trying to put a lid on their drink or searching for a phone number their focus is not fully on the road and it puts lives in danger.  A startling statistic, around 38,000 people die each year due to distracted driving.

It's something everyone is guilty of, talking while driving, but cell phones are only one distraction inside the car causing serious problems on the roadways.  Teenagers say they are most distracted by many things such as multiple friends in the car, the radio, i-pods and talking or texting on the phone.  The worst part, drivers don't realize the consequences of not paying attention until its to late.

Tom Mossley, driving instructor for the Southeastern Oklahoma Driving School says, "Most people think a 20 second text message no big deal.  It's just 20 seconds out of life, but it can cause so many problems."

Now, distracted driving is an issue being addressed in driver's education.  Instructor's are showing graphic, real life scenarios to catch students attention and sometimes the graphic scenes are to much to handle.  "I have have students opt out just because they have lost friends or relatives because of distracted driving," says Mossley.

Even with the education, teenagers are still finding themselves distracted on the roads.   Brittany Renfro, a teenage driver says, "My friends will be looking down texting and someone in front will be stopping and they have to slam on their breaks," and her friend Olivia Reston adds, "Every time I'm in the car with my younger friends, their always on the phone."

The extra attention driver's ed is paying to distractions is helping cut down on irresponsible driving, but helping kids fight distractions can also start at home.  Katy Lehr tells us her parents reinforce safety inside her car.  "My parents have also talked to me about it.  They want to make sure I am safe and I do not get into an accident."

The extra time parents take to talk to their kids about safety is helping teenagers make more responsible decisions when taking the wheel.  "If I am driving and I have someone in my car, I'll hand them my phone and have them send the text", says high school student Brittany Renfro.

For teens, learning to drive is hard enough without the added distractions from radio, I-pods, and cell phones.

Tom Mossely also tell us the death rate from distracted driving has not declined over the years, instead the distractions have changed.  In the 80s he says the biggest problem was drinking and driving, the 90s it was road rage and now it's technology causing around 38,000 deaths on the roadways each year.