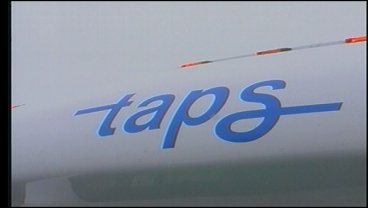 GRAYSON CO., TX---The public transportation system TAPS has recieved almost $2 million from the government and for our area, that means more jobs. Michelle Gillespie reports that because of that money, the company has hired 30 new bus drivers in the month of September, something many of those drivers say is a godsend for them and their families.

"They were able to bring me on full time here and it's been a blessing for me," says TAPS bus driver Marlon Mitchell.

Marlon Mitchell describes driving a bus as simply "a higher calling". For more than five years, he's been a school bus driver in several different school districts throughout North Texas but this past May, he decided he wanted to do something a little different.

"I enjoy working with people and serving people and meeting new people every day so it's been a blessing for me to get paid to do something I enjoy," says Mitchell.

Mitchell was hired part-time in July but to cover his expenses had to work a second job at Target for almost two months but since TAPS recently recieved a second round of stimulus money to the tune of $ 550,000 dollars, the company was able to hire Mitchell on as a full time employee.

"In this time, just to have a full time job, I feel truly blessed to be to and it's helped me and my family and some needs that need to be met," says Mitchell.

In the month of September, TAPS hired more than 30 new drivers because stimulus money allowed them to buy 16 new buses and expand and create new bus routes.

Today, new hire Dave Renshaw went through TAPS orientation before he can start taking over routes next week.

"I put in a half dozen applications with no call back or anything but this one they called back a week later and came in, started the process and here I am today," says Renshaw.

Renshaw, like Mitchell, says his new job helps pay the bills at time when money is tight.

"I was looking for something to fill in and make a little extra money and still do what I love doing," says Renshaw.

Underwood says because ridership on TAPS buses hit an all-time high in September, he plans to purchase more buses and hire even more drivers in the months to come.