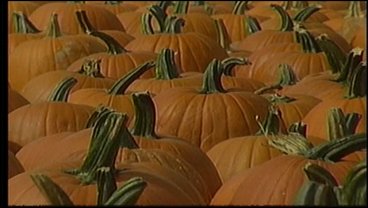 It's October, and that means it's time for jack-o-lanterns and pumpkin pies. But, nationwide, this year is looking to be a gloomy one for the orange gourds. According to farmers in the northeast and midwest, where most pumpkins are grown, record rainfall this summer has left most pumpkins still green on the vine. Jhen Kordela has more.

While it is a problem nationally, it's not here locally. To find out why, KTEN went to a local farm.

From a few ounces to more than 100 lbs., the selection at this local patch even has the pumpkins smiling. Despite national reports of shortages, regionally, we're doing just fine.

"I always think it's important to buy locally because you've got to keep your money here in town," says Marshall Cathey, owner of Elves Tree Farm.

Cathey, a Grayson County native, has owned the tree farm and pumkin patch in Denison for the past decade.

He gets his gourds from West Texas, where crops are doing well this season.

The only problem at this farm is deciding what to do when the kids come picking.

Yes, there is a pumpkin launcher. But, if you want to save it for Haloween, there's other not-so-scary things to do. New this year: duck races. You use a hand pump to race your rubber ducky down a track.

"You pump the thing and your duck, and then it lets water out into the pipes, and it pushes the ducks down the pipes," says Hunter, also Cathey's son.

"We have a lot of your local schools out -- Sherman schools, Denison schools, Pottsboro and even schools from Durant and McKinney come to see us out here," says Cathey.

There's also a hay ride, animals and a maze.

KTEN checked around with local grocery chains. Officials at Wal-Mart, Albertsons and Krogers say they've had no problem keeping pumpkins in stock.