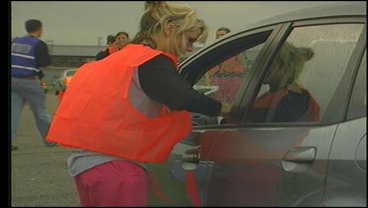 The Bryan County Health Department handed out free flu shots via drive-thru on the Durant fair grounds.  They were stocked with over 2,000 flu shots and thousands showed up to take advantage of the opportunity.

The free shots were offered from 9 a.m. until 4 p.m., but people began showing up around 7:30 in the morning to secure a place in line.  Many in line were flu shot veterans, Charles Akins told us, "I have been taking it for the past 10 years".

Some showed up to take a shot simply because the process seemed intriguing.  "I have never been though a drive-thru flu shot line before so I thought I would try it," says Philips Cater.

Two lanes were set up to usher traffic through as Registered Nurses, 8 in all, handed out shots to the drivers.  It was quite a sight as people drove up, rolled down their windows took the shot and went on their way.  Considering the numbers of those who showed up the line moved pretty quickly, but there was a wait.  The wait ranged from 30 minutes to an hour for some, but most thought it was worth it.

It was a record turnout in Bryan County, but the health department was well prepared, stocked with 2,275 vaccines.  Thousands of shots, costing $30, were handed out for free.  "The vaccine is bought through the health department through funds by the State and Federal Government," says Paul Gilbert.  That's how they were able to hand out thousands of shots for free, but he said not to become accustomed to the drive-thru process because this year could be their last.

"After this year the way health care costs are rising we are going to have to start charging and not do a drive through."  An end to an innovative process many seemed to appreciate.

If you missed the drive-thru Bryan County Health Department is still giving out free shots.  You can contact them 580-924-4299 for more information on when and where.  The shots are free, but they do accept donations.

Also, the vaccines they are handing out do not contain the live flu virus, instead it is a dead virus so you cannot contract the flu from the shot.