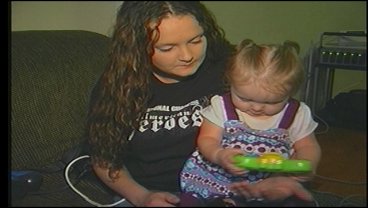 DENISON, TX -- A local woman needs a battery to live. Dubbed by her mother as the "bionic woman" because of a condition developed during pregnancy, Raychel Williams has to be hooked up to electricity at all times to keep her heart going. That is, while she's awaiting a transplant.

With her daughter, Mali, in her arms, Raychel Williams is happy. The life-changing experience of pregnancy brought her a miraculous gift, but it also took her health on a life-threatening turn.

"When Raychel delivered she had a very, very difficult time breathing," says Diana Ellis, Raychel's mother. "The doctors went in there. They said, 'yeah, there s a problem. But, we're not sure what it is'."

With a new baby in tow, she left Texoma Medical Center not knowing what caused her to have difficulty breathing.

Soon after, she collapsed one night at home and was careflighted to Bailer Hospital in Dallas, where doctors finally diagnosed her condition.

"It's peripartum cardiomyopathy, which means it resulted from pregnancy, and it was one in five million chance to actually get this disease," says Raychel Williams, who now needs heart transplant.

She and her newborn spent two-and-a-half months in the hospital. During that time, Williams had a device implanted into her heart.

"Raychel did so good on the open heart surgery, and we felt like that was because of her family," says Ellis.

For nearly a year, Williams spent her days hooked up to batteries or a wall-unit device.

"This white cord right here actually goes into my stomach right here and travels up and is attached to the heart pump," says Williams.

Her mother calls her the bionic woman because her heart, which functions at 2 percent, relies on the machine to get blood to the necessary organs.

That's at least until she can get a heart transplant.

"Going places is really hard because I have batteries that only last so long," says Williams. "So, if I'm going anywhere, I have to be prepared. I have to take all my batteries, and I have to -- it's crazy."

She has to think before doing an every-day task. She can't touch the TV because it could have static, she can't vacuum because it could cause friction with the machine. Her condition has made her extremely dependent on family.

"I wish it would have been me instead of her," says Ellis. "You never get over that feeling that this is your child, and you want to do everything you can."

There are a number of upcoming events to raise money for William's medical costs.

Her family will have a booth at this weekend's Fall Festival in Denison.

Cash donations are being accepted at any Landmark Bank location, under Raychel Williams.