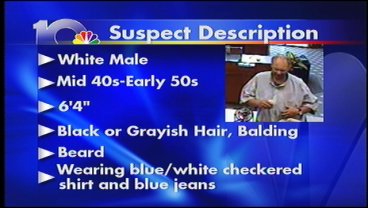 Denison, TX -- the FBI is investigating a bank robbery in Denison and searching for the man responsible. They have released a suspect description and photo. Deeda Payton reports.

The suspect is a white male in his 40s or 50s, about six feet tall, with balding salt and pepper hair and a beard.

Police responded to the bank alarm around one o'clock. Landmark Bank Spokesperson, Jim Vidmar, says "As soon as an incident of this nature takes place we immediately close the facility, the bankers discuss what they saw and heard to make certain they have those down before authorities get there."

Lt. Mike Eppler of the Denison Police Department says a man walked into the Landmark Bank on Morton Street, confronted a teller and made away with an undisclosed amount of money. "There was no weapon produced."

Vidmar says "I just feel very very fortunate that none of our customers or staff were impacted by the incident."

Authorities say he walked out with the cash. "He walked out of the bank of foot. We don't know if a vehicle was involved that will all come out later."

Vidmar says employees are understandably shaken up. "It's one of those things where things happen so quickly, I understand the suspect description came into the bank and I don't have those details yet."

And, this is not the first time this bank has been robbed. "Actually this is the third time we've had an incident of this nature at this facility here in Denison."

Lt. Eppler says "At this point, the FBI is taking over the investigation. We're just assisting them.