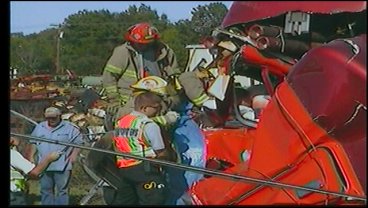 Cooke County, TX -- A man is trapped inside a semi following a three-vehicle crash on Highway 82 West in Cooke County. Seven local crews responded to the crash just before three Tuesday afternoon. They say the 18-wheeler was westbound on 82 when it struck a pickup truck in the intersection at F.M. 371. The pickup truck failed to yield right-of-way to the semi. The semi struck the pickup causing the pickup to hit another car. The semi lost control, ran off the road, struck a power pole and ended up tangled in the live wires until Oncore arrived. Everyone in the pickup truck and the car made it out safely with non life-threatening injuries. The driver of the semi, though, was pinned inside the cab of the 18-wheeler for more than two hours.

Deeda Payton was one of the first to the scene today and shares what she witnessed.

When I arrived traffic was being detoured off of Highway 82 West onto F.M. 371. I saw the wreckage of the car and pickup truck first then walked several hundred feet west on 82 to see emergency crews working to rescue the semi driver who was trapped.

As first responders worked to block and divert traffic, the most noticible thing about this accident scene was all the hands, the efforts of firefighters and emergency crews trying desperately to save a man's life.

I heard witnesses nervously chatting about what had just happened, their voices were clearly heard because of the silence of the helicopter. Care-Flight waited as a quick get away to safety for the victim in the semi who sat still just waiting for his rescue.

Then all at once the roar of emergency vehicles surrounded me as I neared what I was told was the actual semi. Inside was the driver was still alive. He was given an IV while trapped inside the cab.

The cab was split almost completely in two, bent where it struck the power pole, tangled in the power lines and crushed by the weight of the steel beams it was carrying. "It did cause a little bit of a problem trying to get the driver that was in the truck first, but the fire department was able to get him and begin rescue efforts."

The live power lines were taken care of quickly by Oncore. "This had it's own challenges being that the scope of the accident scene was spread out a little bit."

But, minutes turned into hours as crews from seven different departments worked to extricate the man inside. Bystanders could be overheard saying what a tough man he was be to still be alive. They looked in disbelief as the man appeared to be conscience through the carnage and chaos. Two and half hours later, crews lifted the man out of the cab, down onto a board and wheeled him up the grass and down the highway to the helicopter. He was airlifted to Parkland Hospital in Dallas