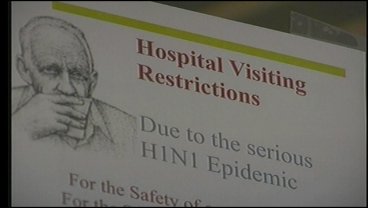 SHERMAN, TX -- Widespread cases of H1N1 are prompting changes at Wilson N. Jones hospital. The hospital announced Monday they are restricting the number of visitors coming to the hospital, in hopes to keep patients and visitors from receiving the virus. Katy Blakey has more.

Doctors at Wilson N. Jones say they are seeing an increased number of patients with flu-like symptoms, but they are no longer testing everyone who walks through their doors for the swine flu.

Hospital officials posted signs on all the doors Monday afternoon - letting visitors know that children 12 and under should not be visiting the hospital. They're also restricting the number of visitors a patient can see. It's one way they are hoping to stop the spread of the virus.

But they're not actively testing everyone for the swine flu - just those in high risk groups, like pregnant women or those with pre-existing conditions. That's a change from what they were doing just a few months ago.

Most doctors offices, we're told, are following the same policy - only testing those high-risk groups.

According to health officials at Texoma Medical Center, a rapid test, done in the doctor's office, can cost as little as $20, but are often not accurate. A test sent to a lab can cost upwards of $200 and can take four to eight days for results. The good news, though, some doctors are reporting swine flu cases have been milder than the regular flu.