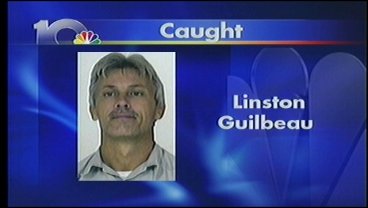 A manhunt over the weekend left two Durant officers injured after a high speed chase.  The suspect was eventually caught, 15 hours later with the help of a Bokchito family.

A massive manhunt began Saturday morning in Bryan County in search of Linston Guilbeau.   The chase came to an end after one officer crashed his patrol car into a tree and another officer crashed his unit unintentionally into the suspects car.  Durant officials say off-duty officers were called in to help hunt down Guilbeau and after 15 hours, he was in police custody.   OHP and many other assisting agencies spent countless hours searching for the suspect around the South and Southeastern region of Blue, Oklahoma stopping any cars coming in and out of the area.  14 hours after he fled, Gil-bow was spotted in a field by Ronald Williams and his family - who immediately recognized the suspect and pinned him down until authorities could arrive.  An arrest OHP says couldn't have happened without the families tip.

Though neighbors may consider the Williams family heros,  they say they were just doing what anyone else would do in their situation.  Ronald Williams, one who helped led to the capture of the suspect says, "We didn't do anything heroic.  We just did what had to be done because we didn't want him running up and down the road.  We knew that a lot of people were looking for him and there was some officers that got hurt so he needed to be off the road.  We did what we had to do."

Guilbeau goes before a judge this afternoon.   He'll face felony charges of eluding authorities. As for the two officers, Justin Blackshear remains in Parkland hospital in serious condition, but we're told he is making progress.  Officer Wesley Crank hurt his back but is now at home with family.