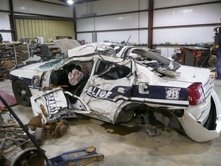 Officer Justin Blackshear remains at Parkland Hospital in serious, but stable condition. According to Durant Police, he suffered serious head and arm injuries when he crashed his patrol unit into a tree. He has already undergone one surgery to repair muscle and tissue damage in his arm. Another surgery is scheduled for Monday. He has several broken bones, but Durant Police tell KTEN his condition is improving. Blackshear has been with Durant PD for two years.

Officer Wesley Crank was also injured in the pursuit when he unintentionally crashed his patrol unit into the suspect's car. Crank hurt his back in the crash and is now recovering at home.

The two officers were injured after authorities say Linston Guilbeau, 44, lead them on a high speed pursuit. The suspect alluded authorities for more than 15 hours hiding out in the Blue/Bokchito area, until the William's family spotted him and recognized him as the man on the run.

"We didn't take the chance for him to go anywhere," said Ronald Williams. "We put him down on the ground. We told him to get down and he went down very quietly and peacefully and we just kept him there until the police and wait for them to show up."

Guilbeau is expected to go before a Bryan County judge on Monday and will face felony charges for eluding a police officer and leaving the scene of an injury accident.