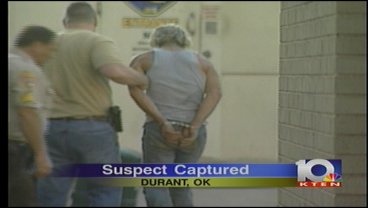 An overnight pursuit led to two Durant police officers being injured and prompted a massive manhunt Saturday morning. The manhunt ended around 5:30 Saturday afternoon, after Bryan County residents made a citizen's arrest.

Lingston Guilbeau, 44, was booked into the Bryan County jail shortly after the incident. He was captured off Green Acre Road, after eluding authorities for more than 15 hours. Residents living near that area spotted Guilbeau walking across a field and recognized him from pictures they'd seen posted around the area. Several men approached him and held him until law enforcement arrived. They say the suspect gave them no trouble and surrendered peacefully.

"We didn't do nothing heroic," said Ronald Williams, who helped capture the suspect. "We just done what had to be done, because we didn't want him running up and down the road. There were a lot of people who were looking for him and there were some officers that got hurt, so he needed to be off the road. We done what he had to do."

"With the help of citizens calling into the 911 center they actually saw the suspect in a field and gave a location of where they were," said OHP Trooper Steve Nabors. "As they kept those people on the phone until we could get units down in this area and a capture was made without incident, so we're grateful for that."

Authorities spent all night and all afternoon combing the region. They even set up a perimeter in the Roberta-Blue area and checked vehicles coming in and out of the area. The Oklahoma Highway Patrol brought in their search dogs and used helicopters to search from the air, but in the end it was some observant residents who spotted the suspect.

The manhunt began after Guilbeau fled the scene of an assault call and led Durant authorities on a high-speed pursuit. During that chase, one officer crashed his unit into a tree. His name has not yet been released, but he suffered serious head and trunk injuries. He was air-lifted to Parkland Hospital where he remains in their intensive care unit.

Another officer was also injured after he unintentionally crashed his patrol unit into the suspect's car after Guilbeau ditched it on a dead-end road. The officer, Wesley Crank, was taken to MCSO with back injuries. We're told he is now back at home, resting with family.

"We're all pulling together on something like this," said Lt. Carrie Wyrick. "I mean we've had officers in reserve come out, off duty officers hit the streets as soon as they heard and they've been working, several of them, twelve to twenty hours. I mean we put dedication behind this, especially when one of our own is injured."

Authorities have not released the name of the officer who was seriously injured, but we'll keep you posted on his condition.