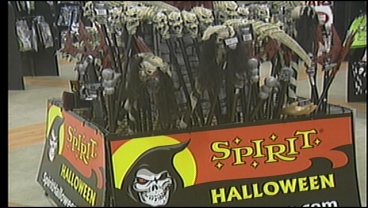 It's leased out by Woodmont commercial retail group out of Dallas, and so far it's proved to be beneficial for the local economy.

"While working with some tenants, this opportunity came about and I was like we're not going to have anything til' the end of the year, so lets go ahead and do this now," said Brian Frank who's running the temporary lease through Woodmont.

Store manager, John Singleton, says this opening came at a perfect time because of the economy.

"I really needed the work and it's fitting the bill for right now, " Singleton said.

Customer's were having a ball trying on hats and costumes in the store. Two local Grayson Co. college students say this type of Halloween treat doesn't come too often in Sherman.

"They don't have a big selection anywhere else," said customer Amy Simmons.

"Whenever it's needed it's always really good to have it around cause there's so many things to choose from," said customer Samantha Lotito.

Woodmont group says after the Halloween season, they have plans to move in a permanent commercial tenant into the old Circuit City building.