Plan For Highway 70 Bypass in Durant 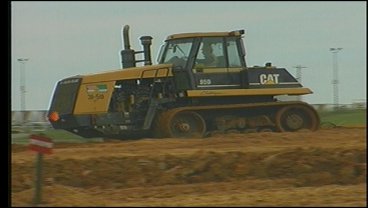 It's a $30 million project eight years in the making a new Highway 70 bypass that will circle around the southern part of Durant.

The hope: to make the fastest growing rural city in Oklahoma a bit larger and more efficient.

Durant's population has grown more than 10 percent over the past eight years.

"As your city grows, your traffic grows," says Kramer.

An O-DOT financed project designed to keep semi-trucks and agricultural vehicles off of Durant's Main Street.

"It will free up parking places, less traffic of non-shoppers and it's going to make our business district in Durant more business-friendly," says Kramer.

The Highway 70 bypass will provide a quicker route around Durant but still give a considerable amount of access to the downtown area.

"What really makes it an asset is the ability to get off in several different locations to come into Durant," says Durant City Manager Jim Dunegan.

And Durant city officials hope that one day, their city will grow and stretch all the way out to the new bypass.

"It frees up areas that are virgin agricultural land and we'll be able to use that land for industrial parks, commercial development like retail shops, all for the future expansion of our city," says Kramer.

Durant City Manager Jim Dunegan says he expects the Highway 70 bypass project to be completed within the next three to four years.