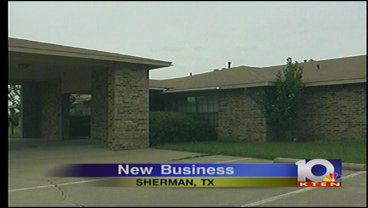 Sherman, TX -- an abandoned nursing home in Sherman is coming back to life. The old Heritage Manor will soon be an assisted living and memory care facility. And, the news business is expected to bring 15 to 25 new jobs to the area.  Deeda Payton has the details.

The building is located on F.M. 1417 just north of the Highway 56 intersection in Sherman. It used to be the old Heritage Manor Nursing Home, but the for the last five years it has been nothing more than an eyesore.

Yesterday, a group of local investors secured a specific use permit to turn it into a state-of-the-art assisted living facility. "We actually just happened about the property it's been abandoned for several years now and it's actually in pretty decent structural condition, just needs a lot of cosmetic work."

The building was constructed in the early 1980s and has held up well. Bluestone Partners, the company that will be renovating the facility, says it currently has about 80 rooms that they will turn into about 52 rooms to give tenants extra space.

The plan is to renovate the exterior and interior and create several different amenities including a workout room, a media room, library, Internet cafe, spa and a couple dining rooms.

Construction on the old Heritage Manor is slated to being within the next month. A waiting list for tenants will start around December and it is expected to open in about ten months to a year.