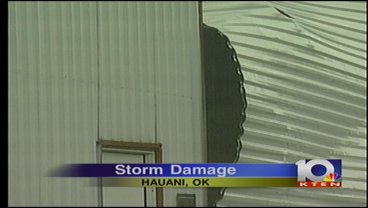 MARSHALL CO., OK -- Straight line winds on Monday night caused damage in Marshall county and a local volunteer fire department to shut down for the day.

Hauani Creek fire department in Oklahoma weren't able to get out and pick up down trees and damaged structures after their trucks were locked in thier fire shed.

Fire Chief, Wes Saxon said they had back up from other fire departments in the area.

Meanwhile, some residents reported minor damage. One residents had an entire shed collapse after the winds blew through. Another resident had a damaged fence in their front yard.

"Private fence was blown down and stuff was blowing in the swimming pool and things at the house were flying against the house, so we all run in through the safe room," said Hauani Creek resident Sam Goodwin.

The Hauani Creek fire department says they're hoping to get their fence fixed in the morning.