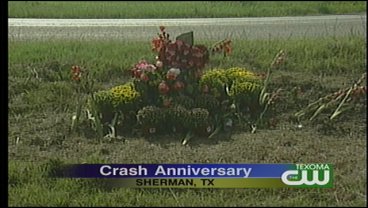 SHERMAN, TX -- Monday marks the somber anniversary of one of the worst accidents in Sherman's history.

A single cross marks the crash site where ten lives were taken on this date in 2004 near the Kaiser plant.

It happened after a semi driver on Highway 75 crossed over the center median and landed on top of the SUV carrying a family and pick-up truck loaded with roofers, crushing both vehicles. Ten people died that day, including three children.

The driver of the semi, Miroslaw Jozwiak, was charged with ten counts of criminally negligent homicide. He was found guilty in 2006 and sentenced to ten years in prison. Tests showed foreign drugs were in his system at the time of the crash.

Since that crash, TxDot was able to install concrete barriers down Highway 75, seperating the northbound and southbound lanes.