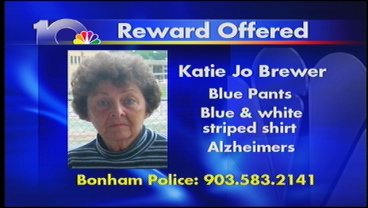 BONHAM, TX -- Nearly a week after she went missing, still no good news regarding the search for Katie Jo Brewer, but now here family is offering a reward.

A $5,000 reward is being offered leading to the safe return of Brewer. She was last seen early last Saturday morning near her Bonham home. She suffers from Alzheimer's and dementia. Her family believes she may have wandered from her home.

Since she was first reported missing, more than 400 volunteers have combed east Bonham looking for Brewer, but have had no luck. There is no organized search for her at this time, but her family is still actively looking for her. Police are still asking the public to search their RVs, garages, out-buildings and anywhere where Mrs. Brewer may have sought shelter during last week's rain.