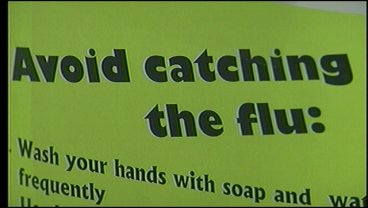 At some Texoma colleges, flu-like symptoms are on the rise. KTEN's Jhen Kordela has how school officials are dealing with sick students and fighting off germs.

Here's a breakdown of our four-year colleges in Texoma: ECU, SOSU, and Austin College.   According to East Central University, twice the number of students than normal are reporting flu-like symptoms. Officials at Southeastern Oklahoma State University say it's normal. And, Austin College is at an increase, as well.

At Austin College, the sanitizer's stocked, the information is out, and the proper precautions are posted.

Officials stocked their freshman with flu fighting gear at orientation.

"These were given to the freshman in a bag so they'd have their own thermometer," says Timothy Millerick, VP of student affairs.

But, like many campuses across the country, germs make their way around. And, some students are concerned.

"I actually am, because I work in the health center where we get all the sick people," says Vanessa Perales, a student. "And, there's always that risk of infection."

Others though, aren't too worried.

"I think, honestly, that it may be a little overrated because if you take the swine off it, it's just the flu," says Felicia Rollins, a student.

Austin college has had more than 25 cases of reported flu-like symptoms.

That's a little more than what they'd normally have for this time of year.

"I just hope everyone who is sick goes to the nurse because there is a girl in one of my classes who came in, and she looked sick like she had the flu," says Rollins.

"We asked students to stay out 24 hours beyond being fever free without aspirin or anything like that, so it's just case by case," says Millerick.

Cases that will soon be avoided, as flu shots are on their way.

"We actually are in the mix with the state to get our flu shots here by mid-October," says Millerick.

Officials hope to have them sooner, if at all possible.

Austin College has also set up an isolation center so those with symptoms aren't exposed to other students in the dorms.