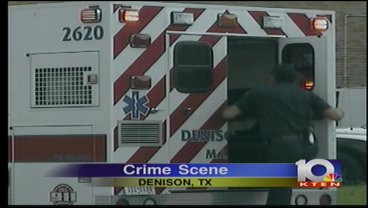 DENISON, TX -- Denison police are investigating after they found one man dead and another critically injured late Thursday afternoon.

Police cars, fire trucks, and emergency vehicles lined the street at Mirick and Crawford earlier in the afternoon.

Police continued to wait outside of the residence through the early evening asking neighbors if they saw or heard anything.

Meanwhile, police are asking anyone to come forward with any information regarding this investigation.

"Anybody with any information about it, we certainly want them to give us a call and let us know. We'd like to talk to them," said Denison Police Dept. Lt. Mike Eppler.

Neighbors in the area said they have seen suspicious vehicles leaving this residence several times in the past several weeks.

However, no confirmation as to whether these vehicles are related to this incident.

Again, Denison police are looking into what caused one man to die and another to receive critical injuries at a home on Crawford St.  Updates to follow here on kten.com and on KTEN News Midday, 5, 6 & 10pm.