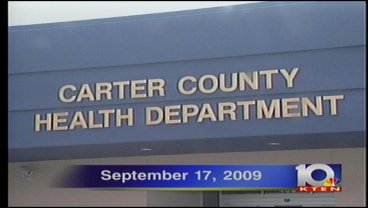 Barely into the flu season yet and already we have an H1N1 related death in Texoma. Thursday, the Oklahoma State Department of Health announced the death of a Carter County man. Deeda Payton has the details.

Not only is news of this death saddening, but it is frightening for many. The OSDH says twenty people have been hospitalized in the past week with flu and 27 total since September first.

During the fall and winter months, many will experience flu-like symptoms, cough, runny nose and fever. These symptoms shouldn't be taken lightly. Regular seasonal influenza results in some 36-thousand deaths in the U.S. Each year. Mendy Spohn of the Carter County Health Department says "It is a sad reminder that flu can be a serious threat. That flu can be a serious threat for some."

And, for those who have pre-existing medical conditions, it can be an even greater cause for worry. "Well, i'm worried about it. I'm in my fifties myself, so you know. I've got COPD so."

Thursday it was announced that a Carter County man, who had an underlying condition, died from H1N1. "Now that we have two viruses going around, you have seasonal flu and H1N1 you do anticipate more hospitalizations and more deaths."

Frightening news for local residents who can't get a seasonal flu shot for another couple of weeks and won't be able to get vaccinated against swine flu until mid-October. "Yes, it's very scary. Knowing that it's going around and all the kids in the schools. It's scary." "Do you get flu shots every year?" "Yes, I sure do." "I get vaccinated once a year."

This year, though.  These Ardmore residents say they will be getting two shots, one for the regular flu and one for H1N1. "Vaccine is our biggest tool against flu and it really can prevent getting infected with influenza.

The OSDH says "they have never ever see widespread flu activity this early in the year." They encourage residents to get vaccinated as soon as the vaccines become available.

A limited supply of the H1N1 vaccines will be available in mid-October across Texoma, but the H1N1 vaccines will first be given to those key populations that are most impacted by the Swine Flu. Vaccinating pregnant woman, children, those with underlying medical conditions and health care workers are the state's top priority.

Seasonal flu shots are available for about $25 at Walgreens Pharmacies, some doctor's offices and at the Grayson County Health Department in both Sherman and Denison.

In Ardmore, a drive thru flu clinic is scheduled for September 30th at the fire departments.  Marrieta will have its drive thru clinic October first and Healdton's is set for October 16th.