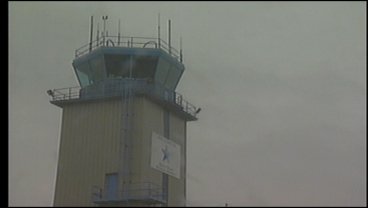 GRAYSON CO., TX -- Ever wonder where all that money goes you pay in fees every time you buy an airline ticket? Turns out, a big chunk of it lands right back in Texoma, no matter where you fly. KTEN's Katy Blakey has more.

The news has some flyers upset about that extra $20 or $30 tacked on to their ticket price, because that money helps airports with private planes and wealthy flyers. But in our region, developers say that annoying fee helps generate big business.

Only a few people living in Texoma will ever get a view like this - 14,000 feet above in a private plane.

And even fewer businesses get the federal funding that small airports do every year.

"We get money every year," said Mike Shahan, Director of the North Texas Regional Airport. "It's probably been 16 to 17 million dollars in the last 3 to 4 years."

That's a lot of money for an airport that only sees a few flights a day.

"It's outrageous to think that the customers on our flights are being asked to support general aviation airports that will never see a commercial flight," said Jim May. "It is a tax policy gone awry."

The issue has some in the aviation business upset, wondering why so much money is being given to small airports when the giant hubs are hurting. Talk to local developers and they'll say these small airports land big business.

"I've not seen a single thing come across economic development that's not looking for a site that doesn't mention an airport in close proximity," said Shahan. "Ruiz Food and Tyson, I don't believe they would be here if they didn't have an airport they could fly their employees in and out.

In comparison, according to Shahan, the funds non-commercial airports receive are nothing compared to what major airports take in federal grants.

"Well DFW might get one small grant for $200 million. So, it dwarfs us. One of their grants could last us a lifetime."

Still, numbers suggest, smaller airports aren't generating as many business flights as they could and are a playground for the wealthy and their expensive toys.

FAA records show 66% of the nation's private planes are flown just for pleasure, trumping the 16 percent for business only. But no matter if you stuck in coach or flying first class in a private plane, it's your money that's taking off at little-known airports all across the country.