Why The Chickasaw Towers Are Planning to Close - KTEN.com - Texoma news, weather and sports

Why The Chickasaw Towers Are Planning to Close 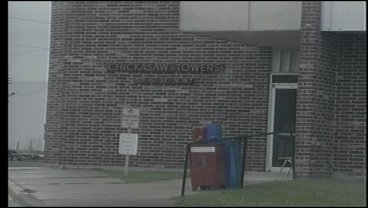 More now on the closing of The Chickasaw Towers, a subsidized living facility in Ardmore. Deeda Payton explains what the housing authority is planning to do with building.

The building is nearly 40-years-old and the housing authority says they don't have the funding to maintain the facility.  Within the next year, about 40 people will be looking for a new home.

The Chickasaw Housing Authority says there are basically three options for The Chickasaw Towers. Best case scenario, they will transfer control to another non-profit, government agency that can afford to renovate and maintain the building. The second option is to put it up for sale. The final option, worst case scenario is to demolish the towers.

The Executive Director, Wayne Scribner, says this is only the beginning of what he expects to be a year-long process. "We're not going to lock the doors up and throw everybody out on the street. There's actually a process that we have to go through and part of that process is we assist with helping them find a place to move to and if they need we'll help them...move them ourselves."

Scribner says yesterday they held a meeting to inform the tenants of their plans. He says the meeting was not meant to scare residents into packing their bags. Still, tenants I spoke to say they still have many unanswered questions.

A second meeting that will address those questions has already been set for this Friday at 10 a.m.