H1N1 Vaccines to be Available Beginning of October 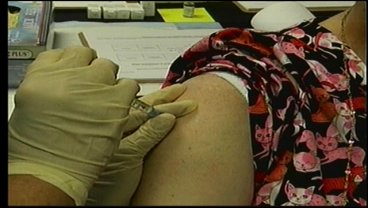 The first doses of the H1N1 flu vaccine could be available even sooner than officials first thought.  The Food and Drug Administration has given the ok to vaccines made by four drug companies and the first shipments could now come in just a few weeks. Deeda Payton reports.

The CDC says we will only need one dose of the vaccine to protect from the virus. And, they say the public could have access to those shots as soon as the beginning of next month. However, local health experts believe it will take a few more weeks for the H1N1 vaccines to reach Texoma.

The World Health Organization has said the Swine Flu could infect as many as one third of the world's population, but Kathleen Sebelius says the new vaccine could soon be a key tool in fighting that spread. "Single dose of vaccine rapidly introduces strong immune response in healthy adults."

The FDA has now approved vaccines from four drug makers paving the way for the first doses to be delivered across the country in early October. The vaccine will be shipped to the states who then will distribute the vaccine to the recommended populations, pregnant women, children and healthcare workers.

As for seasonal flu shots, they are slowly becoming available in Texoma, but they aren't available everywhere just yet. Right now, seasonal flu shots are available at the Grayson County Health Department in both Sherman and Denison and at Walgreens Pharmacies for $25. But, health departments across Oklahoma are still waiting on their seasonal flu vaccines. They expect them to be available by October first.

Health experts say not to wait on the H1N1 vaccine to come in before getting the seasonal flu vaccine. They say go ahead and get vaccinated as they become available to prevent the spread of the regular old flu.