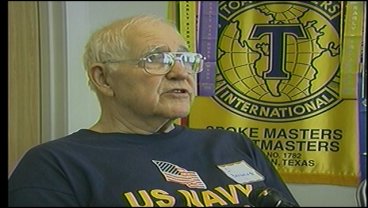 A retired Navy Captain is honored for his years of service and local contributions by the Governor of Texas.  He was granted the title of Admiral in the Texas Navy. Deeda Payton has the story.

Members of the Texas Navy say not too many Texans are familiar with them. They say Texans know Texas was its own country, but they may not know that it also had a its own navy.

Tuesday, the Texas Navy honored a local veteran in a very big way. In a ceremony at the Texoma Council of Governments in Sherman, Siras Browning was honored for a lifetime of exceptional service in the U.S. Navy.

Browning was commissioned as an Admiral in the now honorary Texas Navy. The 80-year-old says he enlisted in the Navy in 1946, and over his 28 year career he was commanding officer of three destroyer ships while on active duty. He served in WWII and both the Korean and Vietnam Wars.

He retired in 1974 as a Captain, but says his love for the Navy carries on. "All of these people who are in our organization love the Navy, eventhough they may have been in for three years during WWII and they saw their shipmates die alongside. They still remember the Navy with fond memories."

The title of Admiral of the Texas Navy doesn't come without responsibility. Browning is charged by the governor with history and preservation of Texas.