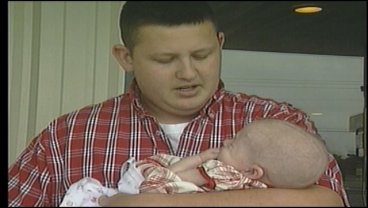 An update now on a story regarding a little girl, named Mikayla Alford. Mikayla is a seven-month-old girl, fighting a very serious disease. KTEN's Jhen Kordela has more on how a Texoma community is coming together to help her and her family.

Mikayla has undergone chemotherapy and two surgeries, battling cancerous tumors inside her brain. Sunday, officers from the Gainesville Police Department, where Mikayla's father works, hosted a benefit, east of Gainesville to help raise money for the family's growing bills.

"This is Mikayla," says Ronald Alford, introducing his daughter.

The seven-month-old was born a fighter. She came into this world a month premature. According to her grandma, Jan Alford, that strength runs in the family.

"They had a little son, Hunter, that had cancer, and he was cancer free in December," says Jan Alford. "And, unfortunately, in July, we found out Mikayla had brain cancer."

Doctors discovered three masses. One was on the left side of Mikayla's brain, as large as two men's fists. The others, on the right side, each about the size of a racquetball.

That stress translates to both their emotions and finances.

The transfusions are 70 miles away at a Dallas hospital. To make those constant trips for treatment, it costs gas and hotel stays, in addition other expenses.

"We have all these bills coming in -- as far as house bills, electric, utilities, all of your normal, every day bills continue going on, even though you can't work," says Ronald Alford."

That bring us to now. With co-workers of Mikayla's dad, also known as the Gainesville Police Department, coming together to support a good friend.

"(Ronald) doesn't walk around just feeling sorry for himself," says Cpl. Tom Reynolds, of the Gainesville Police Department. "He walks around and he's thankful that his daughter's alive."

Members of the force have gone beyond this event. Whenever they can, they work in place of Ronald Alford, so he can still get paid.

Hard, but worth it. After two successful surgeries, Mikayla still has a year's worth of chemo therapy to complete.

"Keep praying for Mikayla," says Ronald Alford. "Pray that this goes away and she can live a long, happy life."

If you weren't able to attend Sunday's event but would like to help Mikayla and her family, there is a fund set up in her name at first state bank in Gainesville.