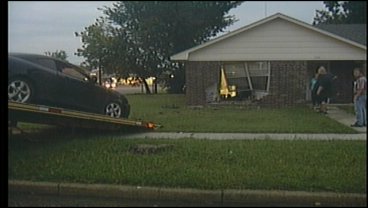 DURANT, OK -- It was a scary moment for a teen driver and residents at a Durant home, after a car plowed into their bedroom.

It happened around 7:30 p.m. Saturday, off 2nd Street and Elm. Durant Police say the 18-year-old driver of the Hyundai car was driving down Elm Street when she dropped her cigarette, lost control of the wheel and slammed into the home.

The vehicle ran into an exterior wall, crashing into part of a bedroom, sending glass and bricks flying.

No one was injured in the crash. The teen driver was written a ticket for inattention.