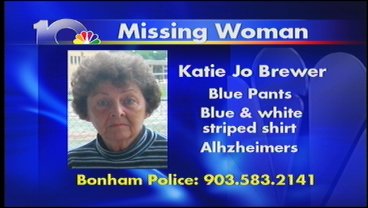 More than 250 volunteers are searching the east part of Bonham for the missing 71 year old. A command post has been set up at the Bonham VA Complex, off E. 9th Street. DPS is using their helicopter to search by air, and K-9 dogs from Dallas have been called to assist in the search.

The woman was reported missing Saturday morning by her husband, Tom Brewer. Her husband identified his wife as 71-year-old Katie Joe Brewer and described her as 5'2", 116lbs, short gray hair and blue eyes. Mrs. Brewer was last seen wearing a navy blue and white horizontally striped shirt and navy blue pants, and is possibly barefoot. Mrs. Brewer has been diagnosed with Alzheimer's and was last seen at her residence on Carpenter Loop in East Bonham at approximately 1 a.m. Saturday. Her husband believes sometime during the night, his wife wandered off.

"I just can't believe we haven't found her yet, but hopefully with this helicopter around and the dogs," said Brewer's husband, Tom. "We've got about three sets of dogs and they've gotten a lot of good leads, but so far, nothing."

"The rain has come and gone," said Sgt. Wendell Bockman. "I won't say it's hindered our search, but it's just made things a little bit more difficult."

Authorities say they did find a pair of shoes, they believe belonged to Brewer on Pecan Street. That's about three quarters of a mile from her home. Authorities believe she took off her shoes and kept walking, rescue dogs picked up her scent near the area.

Anyone with information about Brewer's whereabouts should contact the Bonham Police Department at 903-583-2141.