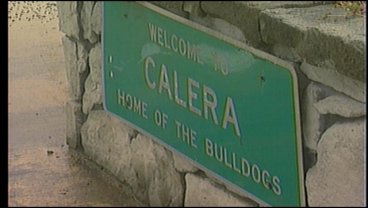 Now, to one town in Texoma that's looking to re-draw its map for one reason: to include an adult novelty store. Calera officials are talking about changing its city limits for a potential business -- a move some residents don't necessarily agree with. KTEN's Jhen Kordela has more.

The Calera council is considering annexing property south of the city, so it can draw in the tax dollars from an adult store set to open soon.

The town limits currently extend to the center of Platter Road. The business is going to go up just outside of that. If the store is in the city limits, Calera could reap the sales tax generated from that business.

Some local residents are all for it.

"Yeah, I'd be for it," says Marco Littlejohn, a Bryan County resident.

Adds Jake Nayes, of Seminole, OK: "Wouldn't bother me. It'd help out the way I see it."

Others though, are concerned about the potential problems that type of business could bring.

And, in a town of less than 2,000 people, they're worried about how it would affect the community.

One of the perks of bringing in the adult store is it allows Calera police to control the activity around it.

Officials will discuss the proposed annexation at the next council meeting next month.