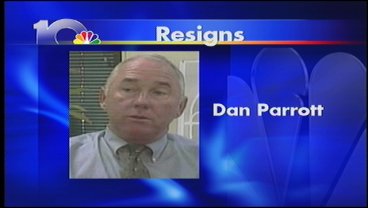 ARDMORE, OK -- The Ardmore City Manager Dan Parrott officially resigned Friday, amid turmoil from the police department, to petitions circulating the streets of town. He spent seven years at the helm of city hall.

Friday, everyone thought his career hung on key questions asked by citizens. But, as he told us live on KTEN News at 6 p.m., Dan Parrott's decision to resign actually came because of threats against his family.

That's the first time Parrott spoke publicly about the threats, and while he didn't give any more detail, it was evident the experience shook him enough to resign as city manager.

The executive session with Ardmore commissioners took about 40 minutes Friday, with about a dozen people waiting for the final word.

The only commissioner not present: Bob Guerin. And, our phone calls to him have not been returned. All Mayor Martin Dyer would say was, it's time to pull this city back together.

We told you on KTEN News at 5 p.m., Parrott did have a severance agreement in his contract in case of a "separation" with the city.

Commissioners amended that -- instead of paying him his gross salary with benefits until June of 2011, the new separation agreement says Parrott will get a gross amount of just more than $125,000. Minus deductions for state and federal taxes, and other contributions, that comes to $90,000, which is six-months salary.

And, the city agreed to let Parrott stay on the city cell phone plan for 30 days so he can notify all contacts of the change.

As of Friday night, Assistant City Manager J. D. Spohn is now the acting City Manager until Ardmore can hire a replacement.

As for Monday's special meeting with the citizens group petitioning Parrott's job, we have not heard if that's been canceled.

The spokesman for Citizens for a Safer Ardmore, John Bean, told KTEN Friday night, he'll still be there if there is still a meeting. He says his group still has questions about financial issues concerning Dan Parrott.

Another development from city hall: Public Information Officer Robin Beal also resigned. So, in the past month -- to the day -- the city of Ardmore has lost its deputy police chief, it's police chief, city manager and public information officer.

KTEN will, of course, keep following the situation as there are sure to be more developments from city hall.